Attrition may have found its way to South Main. Rice fared well in the transfer shuffle last year, swapping out two presumed starters (Roe Wilkins and Zach Abercumbia) for a half dozen impact players like Brad Rozner, Naeem Smith and a trio of offensive lineman.

The first Owls to enter the portal this season are linebacker Anthony Ekpe and offensive tackle Uzoma Osuji.

Ekpe led the team with six sacks last season but injuries hindered his impact in 2019. He appeared in eight games, registering 23 tackles and 2.5 sacks. The majority of that production came early in the season — he tallied 17 of his tackles in the Owls’ first two games. Kenneth Orji plated well in his stead, finishing with 40 tackles, fifth most among members of the front seven.

Osuji started the first six games of the 2018 season before injuries and the emergence of Clay Servin pushed him into more of a reserve role. This year Servin was locked in at the left tackle spot. Incoming transfer Justin Gooseberry manned the right side of line. Osuji was the odd man out, seeing action primarily as a backup in nine games.

Both players were wanted and expected to be a part of next year’s team, per a source. Ekpe projected to be heavily involved, if not a starter on the Rice defense. Osuji would have been in the mix for playing time at the right tackle spot, but likely would have had to beat out a new wave of players at his position. They are the only two Rice football players in the portal at this time. The Owls would certainly love to have both back in the fold in 2020.

Five position battles have been a focal point of Rice Football fall camp. Here’s where the Owls stand at those key spots after the first week of camp.

The suspension of Aaron Cephus left Rice in a tough spot at the wide receiver position. Austin Trammell will push 100 targets, but the rest of the depth chart is going to be asked to step up. August Pitre and Brad Rozner started camp with the first team.

When the team goes to split squad practice, freshman Zane Knipe works with the veterans. Jake Bailey is with the second team at the moment, but he stands out as the best player at his position in that group.

Projected starters against Army as of today: Trammell, Rozner, Pitre

Three grad transfers in the mix make the offensive line one of the most competitive races of camp. The only position that is definitively set in stone is left tackle, where Clay Servin returns as the team’s top starter. Nick Leverett, Brian Chaffin and Cole Garcia are fighting it out for the two interior guard spots with Shea Baker the presumptive favorite to stick at center.

Learn more about each of these challengers by reading their player profiles in our 2019 Rice Football Season Preview, on sale now.

The most competitive race will come at right tackle where Uzoma Osuji and Ouachita Baptist transfer Justin Gooseberry are dueling for the starting role.

Projected starters against Army as of today: From left to right – Servin, Leverett, Baker, Garcia, Gooseberry

Wiley Green has had the inside track on the starting job in 2019 since the end of last season. He performed reasonably well in the spring and has continued to progress through fall camp. But, just like last year, the Owls brought in a grad transfer at the position to push their incumbent starter.

Through the first week of camp, it’s looking like Tom Stewart is the real deal. It was never a given that Green would be the de facto starter against Army, but recent developments make me believe this competition is going to very real and quite contentious. Stewart’s progress, plus the arrival of Jovoni Johnson could see this race draw out til the final days of camp.

Projected starters against Army as of today: Green

While the rest of the aforementioned position battles project to be close, each of them features some sort of frontrunner rather by way of seniority or familiarity with the Owls’ schemes. Two of the most prominent special teams jobs are wide open.

Adam Nunez and Chris Barnes have both had strong fall camps at punter. Nunez was a multi-year starter at TCU; Barnes sat behind current-NFLer Jack Fox. There’s probably not a wrong answer here. The kicker spot features more uncertainty. Will Harrison has experience but wasn’t accurate this spring. Incoming freshman Zach Hoban has an impressive highlight reel, but he’s never produced at the college level.

The emergence of Andrew Bird late last season was huge for the Owls’ secondary which lost several veterans this offseason. Back alongside Bird are D’Angelo Ellis and Tyrae Thornton, both of whom have had their ups and downs. One of the two is going to start opposite Bird out the gate. Who that will be remains to be seen. This is one of the spots where we could see freshmen emerge early to play meaningful snaps.

Projected starters against Army as of today: Bird, Ellis

The top position battles are beginning to surface as Rice football marches onward. Here’s where we stand with three days of fall camp in the books.

The Owls’ revamped offensive line will receive plenty of attention throughout fall camp as a trio of grad transfers vie for starting jobs. One of those new additions, Nick Leverett, seems to have solidified his spot. Leverett was with the team during spring practices and has taken advantage of the extra time in the system. He’s going to claim one of the two starting guard spots, most likely on the left side, where he’s lined up so far during camp.

Shea Baker looks to have the starting center job locked down, at least for now, and Cole Garcia has been taking the majority of the reps with the first team at the right guard spot. Chaffin is an interior guy with experience coming off the bench at Stanford. It’s possible he’ll serve as a “sixth man” for the Owls’ offensive line, spelling starters on drives throughout games.

Another plug — if you haven’t downloaded a copy of the 2019 Rice Football Preview yet, there’s five pages and 2,000+ words on the offensive line.

Gooseberry is listed as the co-starter with Uzoma Osuji at right tackle on the pre-camp depth chart. The battle between those two has been intense and could go down to the wire. Osuji raised his level of play last year, beating out Florida grad transfer Andrew Mike. Gooseberry looks to be a more formidable challenger.

Wide receiver remains up in the air

There are a lot of reps available at wide receiver. As mentioned in the first camp update, August Pitre III has taken up the majority of the reps with the first team. A new wrinkle, though, has been freshman Zane Knipe forcing his way into the mix. He’s got sticky hands and moves well in the field. He’s a step ahead of some of the returning veterans and he’s just beginning to learn the ins and the outs of the offense.

Rounding out the rest of the starters, Austin Trammell looks as reliable as ever. Bradley Rozner has been steady, but hasn’t yet shown the ability to fully utilize his size downfield. He’s tall, but he’s lankier than Aaron Cephus. He’s going to have to get more physical to meet the demands of the Owls’ offense, which lacks any semblance of size apart from him.

Toughness will be the bedrock of this team

The Oklahoma drill is a favorite at South Main. Energy has been high this week, but things seem to crank up an extra notch when pads start popping. Several veterans flashed during Saturday’s session; Blaze Alldredge, Tyrae Thornton, Justin Gooseberry, Anthony Ekpe, Shea Baker and Clay Servin stood out the most. 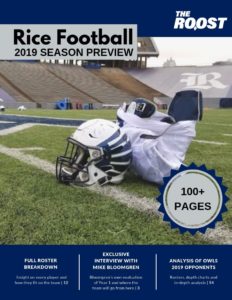