The Rice football spring practices are complete. What did we learn about the defense and where does it stand entering the summer?

There wasn’t much mystery with the Rice football defense entering spring practices. The Owls finished the 2020 regular season ranked 12th nationally in scoring defense and returned the vast majority of their starters and depth. Beyond filling an open spot at linebacker, spring was about tidying up loose ends and building depth. From the line to the secondary, here’s where each position group ended up.

The first Rice football practices are in the books. This is the first of several updates of how the Owls are looking on the grass.

Rice football announced its spring roster in mid-February. Two new coaches, including new offensive coordinator Marques Tuiasosopo, were introduced on Tuesday. In between those events, the Owls kicked off spring practice.

The 15 sessions are scheduled to run throughout the month of March with the spring game set for April 2. Last year’s practices were halted abrupted when COVID-19 restrictions thrust all sports into an unexpected halt. With precautions in place, Rice expects to not only finish but continue to improve during this year’s spring practices.

The Roost will have you covered every step of the way. Subscribers get access to all spring practice notes, recruiting updates and special features. Subscribe on Patreon and get access to it all today. 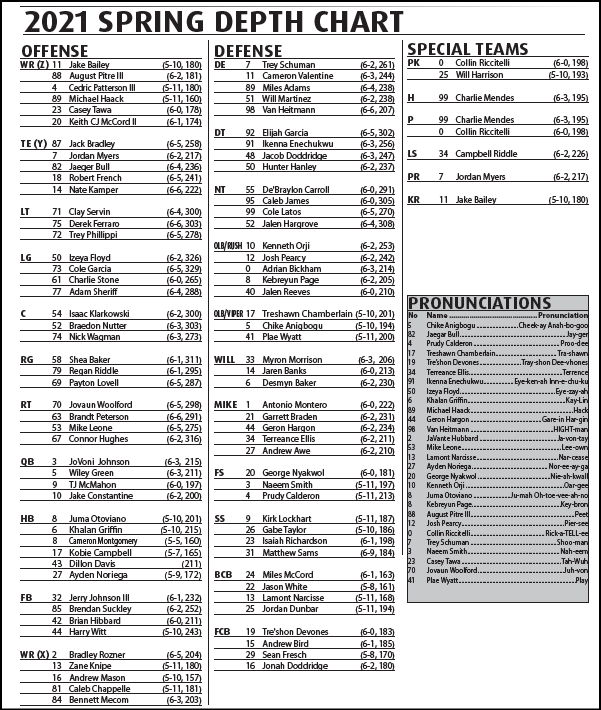 There’s a lot to unpack here. How those players look on the field and what sort of movement we could see over the next few weeks will be covered in the next post. On this occasion, we’ll dive into the most important takeaways from the initial layout of the depth chart.

Rice Football started fast and faded just as quickly as the Owls drop to 1-2 on the season following a road loss to North Texas.

Expectations were high when Rice football finally returned to the gridiron after a two-week delay. The Owls had suffered consecutive postponements following an uplifting 30-6 win at Southern Miss, snuffing out any momentum the Owls could have hoped to carry into their game against North Texas.

Rice came out strong and faded fast, resulting in a humbling road loss to North Texas. Here are a few immediate reactions from the game.

Rice fumbled FOUR times in the first half. That’s an inexcusable turnover count for a full game, let alone the first 30 minutes of action. The mistakes turned what looked to be a runaway day for the Rice offense into an ugly slugfest against what began as a flailing North Texas attack.

The Owls’ lost one fumble in the redzone. Soon after, Mike Collins put a ball behind Jake Bailey in the endzone on fourth down. If he throws that in front of Bailey, it’s a 17-0 Rice lead. Instead, North Texas takes over and a 66-yard Jason Bean touchdown run cuts the Rice lead to 10-7. Turnovers plus turnovers on downs put Rice in a bad spot.

The muffed punt was the third instance of the usually sharp Rice special teams unit turning it over in the Owls’ first three games. North Texas fired a line-drive ball toward Austin Trammell, who was hit immediately upon fielding the ball, almost as if he didn’t expect the quick contact. Again, North Texas capitalized, with a go-ahead touchdown on the ensuing possession.

The offense has looked good. But if they can’t eliminate the self-inflicted mistakes, it’s not going to matter. That goes for the special teams too, who saw an 80+ yard punt return touchdown called back by an uncharacteristic penalty.

The offensive line meets its match

Through their first two games, the Rice offensive line had played extremely well. Ball carriers weren’t getting hit in the backfield and Mike Collins was given clean pockets to work. There were plenty of instances of those things against North Texas, but the frequency of open spaces significantly lessened.

North Texas defensive tackle Dion Novil was a monster. His power on the interior of the line seemed to catch the Owls off guard. He routinely impacted Collins in the pocket, highlighted by an impressive sequence at the end of the first half. He pushed the center into Collins on the second-to-last play of the game to force a hurried throw. Novil then followed up with an unblocked sack on the following play to end the half.

Rice has held up well against powerful interior rushers before. They’ve seen plenty over the past several seasons. They were just flat out beat up front. That left Rice throwing into pressure against a shallow zone all day.

The secondary is going to be alright

Rice received good news this week with the return of Kirk Lockhart, Treshawn Chamberlain, and Andrew Bird. Adding the extra experience was a huge boost to a unit that had been up and down to start the season.

The Owls needed all their reinforcements, and then some. Starting corner Tre’shon Devones was not on the field to start the second half.

When Miles McCord was being attended to on the sideline following a diving attempt, reserve corner Chris Boudreaux, who converted from wide receiver, was forced into the game in the redzone. Naturally, the ball was quickly thrown his way, but he held his ground and helped Rice force a quick field goal. McCord and Bird were both on the field to finish the game.

Not silent, but flat

The Rice offense had been dynamite early on this season. Rice entered the North Texas game coming off back-to-back 30+ point performances. It seemed clear that the offense was better than it had been in the past, but it was hard to christen them good without at least one more game of data.

They came out sharp against North Texas, but mistakes and the shaky performance on the offensive line proved this unit still has some work to do before they make the jump. This touchdown from Collins to Trammell proved how good the unit can be when they’re clicking:

Perfect placement on this TD pass from Collins to Trammell. QB puts the ball where only the WR can get it. #GoOwlspic.twitter.com/qfn0xKRXrW

But the inability to solve the North Texas defense proved more troublesome. After the Owls’ hot start, North Texas deployed basically the same scheme. They kept defenders near the box, crashing the line on run plays and dropping them into a zone if the Owls passed. Rice wasn’t able to solve that wrinkle, and they paid for it dearly.

The blueprint is out now for the rest of Conference USA. Rice is going to see this defensive style deployed against them again. They’ll have to be ready.

Every week we’ll have a stat, storyline or key learning from the game reserved for our subscribers.

Rice football has suffered back-to-back postponements. The bulk of the schemes will be the same, but improvements have been made over the last two weeks.

A lot can change in three weeks. That was true of Rice football from the start to end of fall camp. Players came in and out of the lineup, adjustments were made. This time Rice has the added benefit of live reps as a baseline.

To be clear, I don’t expect seismic change when Rice takes the field next (hopefully on Saturday against North Texas). But there have been a few things over the last few weeks of practice that should look different, most of them for the better.

A breakout from the trenches

After another postponement, Rice football is ready to take the field again, hopefully as soon as this weekend against North Texas. Here are the latest practice notes and press conference quotes.

Rice football is two weeks removed from their most recent football. Oddly enough, the Owls’ first game against Middle Tennessee was the week following a matchup between North Texas and Middle Tennessee. The Mean Green haven’t returned to the field since.

Owls’ head coach Mike Bloomgren met with the media today to share some of his thoughts on the game ahead.

There is a lot of encouraging news on the injury front. Bloomgren said the team didn’t have “many people left to get healthy.” That should include a few starters returning to the field soon as well as a practice sighting on the offensive side of the ball. Injuries and depth chart fluidity has afforded several players additional opportunities. We’ve also got some notes on a few guys that have stepped up in the interim.

“We want to make this the most exclusive offer in the country… one out of every four offers is committed to you or signing with you, we feel good about that because we get a chance to really develop real relationships, get to know the parents, the families and otherwise.” – Director of Recruiting Alex Brown on the upcoming 2021 class

With the way we prepare and with our process and what it’s all about, I don’t know if I’m real excited about those possibilities… I really would like more than 48 hours of notice that you saw UCLA and Cal last week. I certainly think that that would cause a lot of coaches in this building not to sleep for 48 hours. But hey, we’ll make it work if that’s the case. We want to play a game. And right now, we’re certainly planning on playing Seth Littrell and North Texas.” – Mike Bloomgren on the possibility of last-minute scheduling changes

“I think they probably found their guy in Jason Bean, and he’s the one that we’re going to prepare to stop. If Austin [Aune] jumps in there, their offense won’t change too much. They’re still going to try to find number one Jaelon Darden, and they should.” – Bloomgren on the North Texas offense

Who’s back and who’s not