This 160-page publication details everything you could imagine about Rice Football. It includes insight on the entire Rice roster as well with commentary on all 110 players on the active roster. From there the scope widens to breakdowns of every Conference USA team and all four of the Owls’ non-conference opponents. Each profile was compiled with the help from local experts who cover that beat on a daily basis with timely transfer information and any available spring updates.

Get answers to questions like “Who has the leg up in the Rice quarterback battle?” or “Which incoming players could make the biggest impact?” or “Who are the top returning players Rice will face in Conference USA?”

This year’s edition included a feature story based on an interview with Athletic Director Joe Karlgaard. In the piece, we discuss how he evaluates head coach Mike Bloomgren’s coaching tenure.

The complete contents of the Conference USA Preview are contained within the Rice Preview. This 72-page guide includes everything Conference USA fans need to know for the upcoming season. Every team in the conference has a four-page profile. These profiles including coaching notes, pressing questions and the major storylines each squad faces this season. It also includes roster breakdowns with profiles on the biggest incoming and outgoing players.

You can always find additional Rice Football and Conference USA Football content on the website. If you enjoy the Preview and want to get further involved, consider supporting us on Patreon or check out The Roost Shop. Our subscribers get exclusive content ranging from recruiting and practice updates to special analysis. For starters, they got a copy of the Preview for free!

The incoming Rice football freshman is one step closer to taking the field for the first time. The new Owls have been assigned jersey numbers.

The past few months have been unique for everyone. The incoming Rice football freshman class has been no exception. In a more traditional offseason, each player would have received a virtual copy of the playbook and instructions to study up before they got to campus for summer workouts. Their understanding would have been primarily driven by their own study and willingness to get ahead of the curve.

The virtual learning environment brought about in response to the COVID-19 pandemic allowed for those freshmen to mee with their teammates. In many ways, they’ve had more exposure to the program and the scheme than any class has had before them. Rather than begin their learning cover in earnest over the summer, the incoming class had a significant head start.

With voluntary workouts set to begin soon, Rice football players and staff will begin to arrive on campus. That will include the 27 true freshmen that Rice will add to the team for the 2020 season. Here are the jersey numbers for those newcomers:

The 2020 Rice Football Recruiting class will add to their already impressive class on National Signing Day. Stay here for live updates as they happen.

We’ll have all the latest news and notes from National Signing Day updated throughout the day. The 2020 Rice Football Recruiting class had 17 players signed prior to today and should up that total significantly.

Stay tuned for news on the four commits as well as any potential new additions making announcements on Wednesday. There will be some fireworks you don’t want to miss.

The class is (mostly) done and I’ve got a lot of notes to work through on the full class. Here’s some quick thoughts from coach Bloomgren.

And more on the offensive signees here:

That’s a wrap… sort of

Looks like we should update the all-time recruiting ranks. In the past two classes, Bloomgren’s staff has signed four of the top 13 players in program history

The Stanford pipeline continues to flow. Transfer kicker Collin Riccitelli is in.

JUCO linebacker Jaren Banks, who committed earlier this week, has turned in his paperwork. He’s officially an Owl.

Had to wait until the West coast woke up for our next wave of signees. The new name here is Calabasas corner Lamont Narcisse. He signs with Rice after a hard fight from Washington State. He is also a Top-10 rated player in the Owls’ 247 Sports history.

While we wait for the next one in, here’s a snapshot of the top commits the Owls have signed with their class and 247 Sports rating. Three of the top 12 will be on campus this upcoming season.

Players are allowed to sign at 7:00 a.m. local time, which means the East Coast is up first in just a few minutes. Stay tuned, Rice is going to start out strong.

Most of the 2020 Rice Football recruiting class has been nailed down prior to the start of the Early Signing Period. The most recent list is available here where you can read profiles on the most notable players. Of those committed players — which range from transfers to walk ons — here’s the list of those who did not sign in December. We’ll be keeping an eye on these names Wednesday morning. 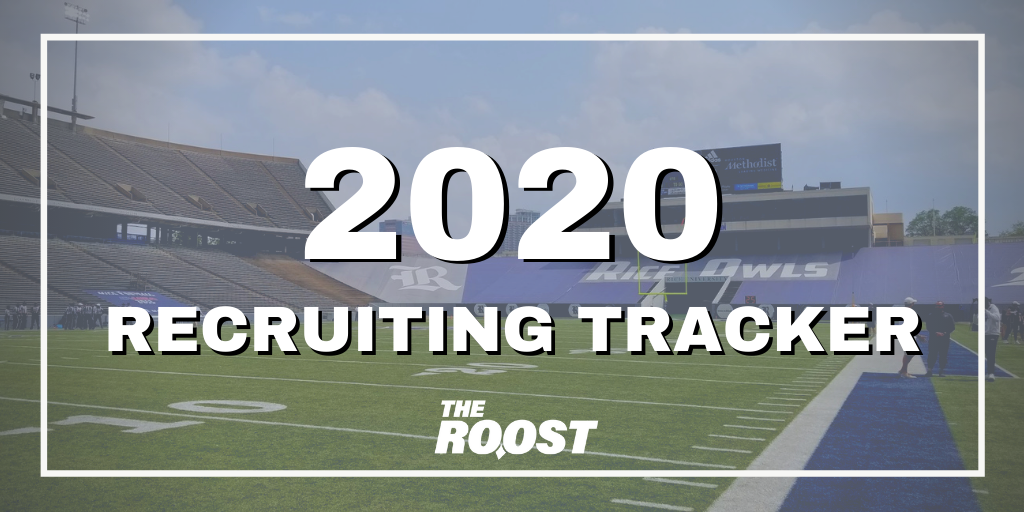