The abbreviated 2020 Rice football season provided some answers regarding where the program is at. But questions remaining, starting with the receiving corps.

The injuries sustained by the Rice football wide receiving corps last season were unbelievable. Never in my time covering college football had I seen a group of pass catchers so depleted by injuries. It’s not as if there weren’t enough wideouts on the roster — there were enough bodies — they were just all hurt.

By the time Rice played its final regular season game against UAB, the Owls had one scholarship wide receiver available at practice, and he was beaten up, too. Which brings us to the 2021 season and our first of a few pieces in our Burning Questions series this offseason. Who fills that void in the passing game in 2021?

The Roost has you covered in season and throughout the offseason. Get access to all practice notes, recruiting updates and special features like this one. Subscribe on Patreon and unlock them all today.

Rice football seeks to finish strong against UAB on Senior Day. Here are the latest notes and press conference quotes from the week.

It was a great week for Rice football. Although fans are still riding high from the Owls’ historic road win against Marshall, the team has turned the page and has their attention focused squarely on UAB. For the first time this season, there will be fans allowed into Rice Stadium to see the contest in person.

Head coach Mike Bloomgren spoke about the week that was and the task at hand. A few players chimed in as well. Then there’s the depth chart to get to, including some unfortunate injuries at key positions and some notes on what we might see on the field on Saturday.

“Because it’s such a big win, I probably let myself go an extra day with it. I probably went 48 hours instead of 24 hours enjoying it, because it is an absolutely huge win. But we know that that game, as good as we played, it won’t give us any points on the scoreboard. It won’t have a single stop on defense or a single interception. We have to go earn that this week.” – Mike Bloomgren on switching focus from Marshall to UAB

“UAB has a great offensive line. We’re gonna take the same things that we did last week, change up the scheme, and do the same thing this week. It’s no different. Whoever you put in front of us, that’s who we gotta go hit. So we gotta make it happen.”- Offensive lineman Jovaun Woolford on the UAB defensive front

“Awards come with wins. I think the biggest thing that I see when I see that I won that award is that we had a dominant team because I’ve had better individual performances but it doesn’t mean anything when you don’t get that W. The biggest thing that I’m excited about is that we got such a big team win.” – Linebacker Blaze Alldredge on being named C-USA Defensive Player of the Week

Here’s an updated depth chart from Rice football heading into the UAB game and some comments on a few notable additions and omissions as well as some injury notes:

The Rice football receiving corps is running low on bodies. How will the Owls move forward and who will take the field against Southern Miss?

I was paying close attention to the wide receivers at practice this week and had some time to catch up with Rice football wide receivers coach Mike Kershaw. Between the injuries Rice had coming into the season opener against Middle Tennessee and the loss of a starter in the opener itself, the need for answers at the position has never been more pressing.

Beyond the individuals, there’s also some insight below on the offense as a whole as a result of the thinned out receiving corps. How the Owls will line up against Southern Miss could be impacted by their limited numbers. If you’re looking for a deeper dive, I dug into the reasons I believe the offensive uptick can continue despite the injuries in this month’s All-American Q&A.

And then there were five…

The 2020 Rice football freshman class has impressed throughout fall camp. This weekend they’ll have their first opportunities to do it in a collegiate game.

Rice football has wrapped up fall camp. They’ll take the field on Saturday against Middle Tennessee. Players like Austin Trammell and Blaze Alldredge have been as impressive as ever in practices, but neither of those performances comes as much of a surprise.

Beyond assessing such proven commodities, this time of year is sometimes better spent looking for who might be the next wave of playmakers on the rise.

Here are a few freshmen who’ve impressed me and earned accolades directly from the coaching staff during camp. They’ll see varying degrees of involvement this weekend, but each guy has the potential to be an important piece on this roster in the weeks and years to come.

Last fall Khalan Griffin suffered a lower-body injury that prematurely ended his senior season. He arrived at South Main buried on the depth chart behind the likes of Juma Otoviano, Jawan King, Cam Montgomery and Ari Broussard. Injuries opened the door for him to get some time with the first team offense. He kicked that door down … and then kept running.

The first depth chart of the 2020 Rice Football season has been published. There weren’t many surprises, but some of those starters weren’t at practice.

I won’t bury the lede, here’s the first depth chart for Rice Football this season. For the most part, it’s chalk. The upperclassmen and vets are in the same spots as they were last season with the freshmen and new names at the bottom of the ranks with room to move upward in the next couple of weeks.

Beyond the depth chart, this update has some important injury updates, including a key player that Rice might be without for a significant amount of time. Later in the week, I’ll have a few early camp standouts. 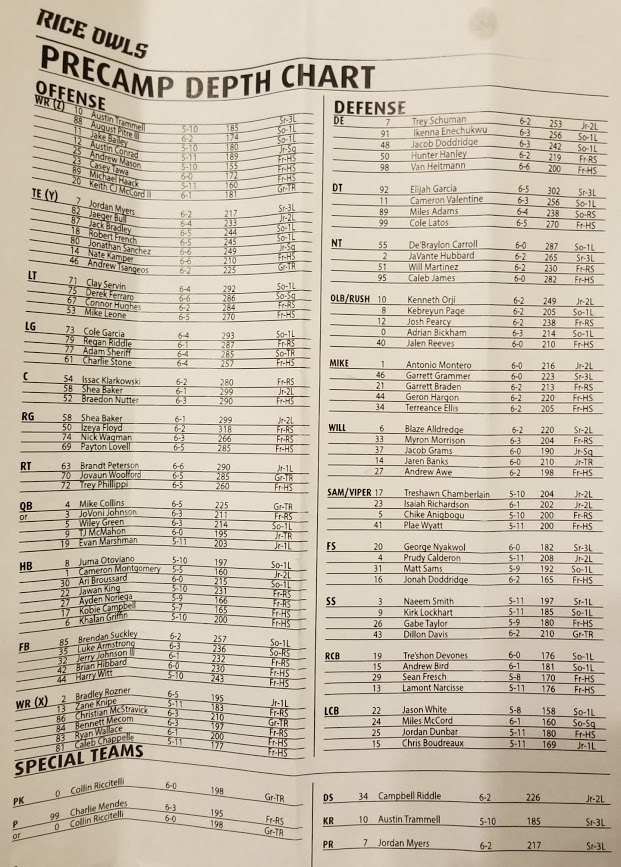 If Jordan Myers really does take over the primary punt return duties this year he’ll be one of the first tight ends to fill that role that I can remember. An OR designation at the punter spot was also somewhat of a surprise. It’s still going to be Charlie Mendes’ job to lose, but it sounds like it’s going to be a real battle between the redshirt freshmen and Stanford transfer Collin Riccitelli.

If it wasn’t evident before, this is officially a two-horse race. As mentioned in the previous update, the man out in front early is