As part of our 2022 Rice Football Preseason Preview series, next we’ll examine the offensive line position and discuss the Owls’ plans for that group.

The Rice football offensive line has been a carousel of injuries and moving parts for much of the last four seasons. This time around, the Owls seem to have a starting five established before the beginning of fall camp featuring a core that has a good amount of playing experience alongside each other. Will that make a difference when the games begin? Here’s our 2022 Offensive Line Preview.

Rice football wrapped up its second scrimmage of spring practice on Friday, marking the last scrimmage before the Spring Game next Saturday.

There wasn’t too much new that stuck out in the second Rice football scrimmage of the spring, but several underlying themes of the spring were emphatically reinforced with some new flair along the way.

The quarterback battle remains close and the defense remains dominant, making the Rice offense scrap for every inch. We’ll unpack all of that and more in this week’s spring practice notebook. Stay tuned for a scrimmage report this weekend.

For those checking in for the first time, or those returning, a quick programming note. Special updates like this are reserved for our subscribers. Get access to all Rice football practice notes, features and more insights like this one when you subscribe on Patreon today.

Rice football has lost a handful of players to the Transfer Portal this week. Who is heading out and how what impact will that have on the Owls?

If the Rice football season spans from August to November, December is Transfer Portal season. The Owls aren’t alone in this modern college football phenomenon. There have been more than 250 transfers in the past week across the country and more are certainly coming.

Why now? At first glance, the end of the regular season seems to be a natural breakpoint in the calendar, but it’s what coincides with that break that is the more likely impetus. College programs around the country hold what many call “exit interviews” where players and staff sit down and talk through the season with individual players and discuss the future. If that future doesn’t align with the desire or expectations of a particular student-athlete, some will choose to part ways.

That sort of changeover is happening at Rice right now, just as it’s happening in football facilities around the nation. To this point, Rice football has largely benefited from this process. For every Blaze Alldredge that enters the portal, Rice has found a Bradley Rozner or Naeem Smith. Current NFL offensive lineman Nick Leverett was a transfer addition, too, as have been five Rice starting quarterbacks.

With that as a preamble, here is the latest list of Rice football players that have reportedly entered the Transfer Portal this week:

Rice football took full advantage of its bye week, evaluating the depth chart and prepping for UTSA. The latest from practice, here.

The bye week is in the books and it was a beneficial time for Rice football. The Owls got a little bit healthier and saw some new faces rise in the extra sessions. We could see a freshman debut this week and others move up the depth chart soon.

For those checking in for the first time, or those returning, a quick programming note. Practice reports are reserved for our subscribers. If you want updates on how Rice football plans to deploy its quarterbacks, position battles, standouts, injuries and more, this is your go-to source. You can get access to all practice notes, recruiting updates and special features like this one when you subscribe to our All-American Tier on Patreon today.

Rice football kicks off conference play this weekend against Southern Miss. Here’s what Mike Bloomgren had to say about it, injury updates and practice notes.

This is the first of a couple of updates coming this week as Rice football prepares to take on Southern Miss. We’ll include updates from head coach Mike Bloomgren’s midweek press conference, then dig further into the details on the depth chart and what the team looks like on the field headed into the weekend.

Rice football found some answers at quarterback this past week and looks to be getting a bit healthier as conference play rolls around. One of those newly healthy players is back at the top of the depth chart this week. We’ll tackle that addition as well as a few developments from practice early this week. First, the quotes:

“I feel like we took some real steps forward as an offense. I think that’s a big thing for us to do. 620 yards, making explosive plays, being able to be efficient at the quarterback position — those are things that we’ve struggled to do over time. It’s really good to go into conference play knowing we’re on an upswing. That gives me a lot of comfort.

Knowing that our defense — we’ve been missing a couple of pieces in the past couple of weeks, but we should get some of those back — that’s really encouraging to me too. Special teams: we’re just continuing to grow. So what do I know? I know that we’re a team that is playing really hard for each other and at times playing really well, but we’ve got to become a consistent bunch for 60 minutes.” – Mike Bloomgren on what he learned about the team in nonconference play

“Defensively, we made a lot of adjustments during the game. I felt like they made a lot of plays. We were really close on a lot of things but kind of a step behind on getting those things done. I don’t think it’s anything we can’t get fixed this week and that’s what we’re working towards. Coach (Brian) Smith is really doing a great job with the defense, getting everyone on the same page. We’re going to try to get out there and look like our defense for 60 minutes. That’s the goal this week.” – Mike Bloomgren on the defense

“It’s definitely a lot of fun, actually, just switching around positions on the d-line. Playing end, playing rush, playing tackle, playing nose — I’ve really played all four [positions] this season, I feel like. All the other guys on the d-line are what Coach Calhoun calls ‘bilingual’. It just makes us a lot more adaptable for to whenever sudden change situations come up in a game and makes us a better team in general.” – Ikenna Enechukwu on the versatility of the defensive line

The Rice football depth chart shifted in response to last week’s performance and a key injury along the offensive line. Hopefully, there will be some more stability from this point onward. Bloomgren hinted he’d like to get to that point in his comments this week. “There’s no more experimenting going on right now,” he said. “We’ve got a group that we trust and we’re going to go forward with those guys.” 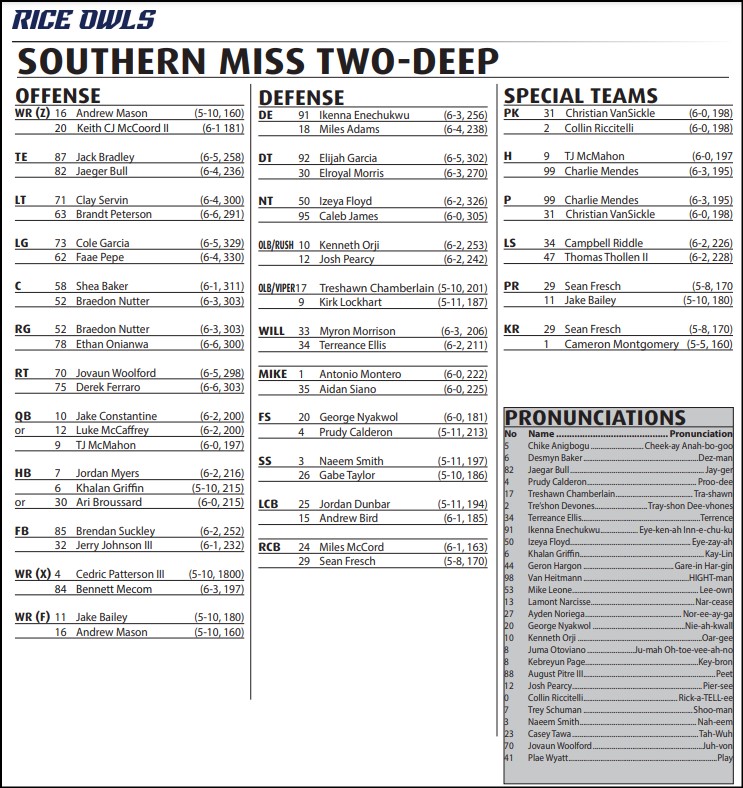