The 2021 Rice Football spring roster has been released. From thoughts on newcomers to departing names, here are five initial observations.

There has been a lot of movement on the coaching staff, but that hasn’t been the only interesting development for the Owls in the past few days. The 2021 Rice Football spring roster was posted over the weekend. You can find the full list here, but we’ve gone a step further and broken down some things that stood out from the initial list.

We’ll start with the most important note, with more observations to follow. We’ll also have all the latest updates on spring practice when it gets underway in March. From position battles to early depth chart projections, you won’t want to miss it. If you’re not a subscriber, now is a great time to jump on board.

This shouldn’t come as a shock to those who have been following along this winter, but quarterback Mike Collins was not listed on the initial spring roster. We’ve still not had any clarification from head coach Mike Bloomgren as to what transpired last fall — hopefully, we get some answers when practices begin — but for now, it looks like Rice will be starting over at the quarterback position once again.

Collins was only expected to be a one-year solution when he was signed. He would have been out of eligibility entering 2021 had it not been for COVID-19 and revised eligibility standards.

As was the case last fall, the Owls will enter spring practice with their future quarterback on the roster. JoVoni Johnson and incoming grad transfer Jake Constantine will be the presumptive favorites to win the job for the upcoming season. It should be an interesting battle to watch this spring.

The 2021 Rice Football Recruiting class has stocked with defensive talent at all three levels from a rangy secondary to powerful additions in the front seven.

Rice signed 18 players on the first day of the Early Signing Period. Of their new additions, 16 are current high school seniors. 11 of them play on the defensive side of the ball, the focal point of this update. Subscribers can check out this position by position breakdown of the 2021 Rice Football recruiting class.

The first members of the 2021 Rice Football recruiting class signed this week, setting the stage for an exciting future at South Main.

The ink is starting to dry on the first day of the Early Signing Period and the 2021 Rice Football recruiting class is off to a great start. Rice signed 18 players, representing the majority of their scholarship additions to their 2021 class.

This class isn’t done yet — there are still a few more weeks before National Signing Day in February — but as it currently stands, here are a few immediate reactions from a group that could end up being pretty special for the Owls.

For those who aren’t subscribers yet, or even those who are, we’re running a special promo this holiday season. Purchase an annual subscription and get two months free.

The majority of the 2021 Rice Football Recruiting class will become signees during the early signing period. Follow all the action here.

Recruiting is the lifeblood of all college football programs and Rice is not different. The Owls have brought in a tremendous amount of talent under Mike Bloomgren so far and this week will continue that trend. This live tracker will follow all the latest news and updates through the week, with some notes along the way on the class as it is finalized. If you’re not a subscriber yet, here’s your chance.

Which newcomers will make sizable impacts like Khalan Griffin, Gabe Taylor and others did this year? This class has plenty of talent which could find its way to the field soon.

Closing thoughts: Rice adds for the present and future with talented 2021 class

Wide receiver MJ Singleton is the only scholarship commit not to sign today. He told me earlier in the week he’d be signing in February. That appears to still be the case, but we’ll follow up on him soon. With that, Rice has announced the remainder of their 2021 class.

Head coach Mike Bloomgren will meet with the media at 1:00 p.m. today, then we’ll have some further remarks to share with everyone.

And one from the West Coast. Offensive lineman Faaeanuu Pepe has sent in his letter of intent.

The entire linebacking corps is now in. Kenny Seymour has signed with Rice.

Another Katy product has inked with the Owls, defensive end Cal Varner is in. Right after him, tight end Jaggar Hebeisen‘s signature comes in, as well as another Alabama product, wide receiver Jayden Folmar.

Another from Alabama, this time its wide receiver Peyton Stevenson.

Just picked up a wave of Texas signees: linebackers Aidan Siano and DJ Arkansas as well as offensive lineman Ethan Onianwa are all in.

The first of a sizable Alabama contingent is on board. Safety Joshua Williams has signed.

A quick reminder, recruits can sign at 7:00 a.m. local time, so the bulk of the Texas and Alabama commits should start getting finalized in the next hour or so.

Defensive lineman Jalen Hargrove is in. That should wrap up the early morning east coast contingent.

That’s two, and this one is a big one. Rice has its quarterback in the boat. Shawqi Itraish has signed.

The first signature is in! Corner  Jonathan “Jojo” Jean is officially an Owl.

Good morning folks. We’ll be posting updates here throughout the morning as players sign as well as updated the recruiting tracker. Should be a good day.

The majority of the 2021 Rice Football recruiting class is in the boat prior to the beginning of the Early Signing Period. In most typical years, we’d have a firmer timetable of who is putting pen to paper when, but COVID-19 has impacted some of the traditional ceremonies. Players are eligible to fax in their signatures starting at 7:00 a.m. local time.

Conference USA Recruiting ranks on the eve of the Early Signing Period.

Rice has the No. 4 class entering Wednesday morning. From a rating perspective, the Owls are on track to surpass last seasons’ average rating, the highest ever from a Rice recruiting class.

Make sure to stay tuned on Twitter and follow our live blog here during the day for updates. Get the latest list of the 2021 Rice Football Recruiting commits by clicking the tracker below. 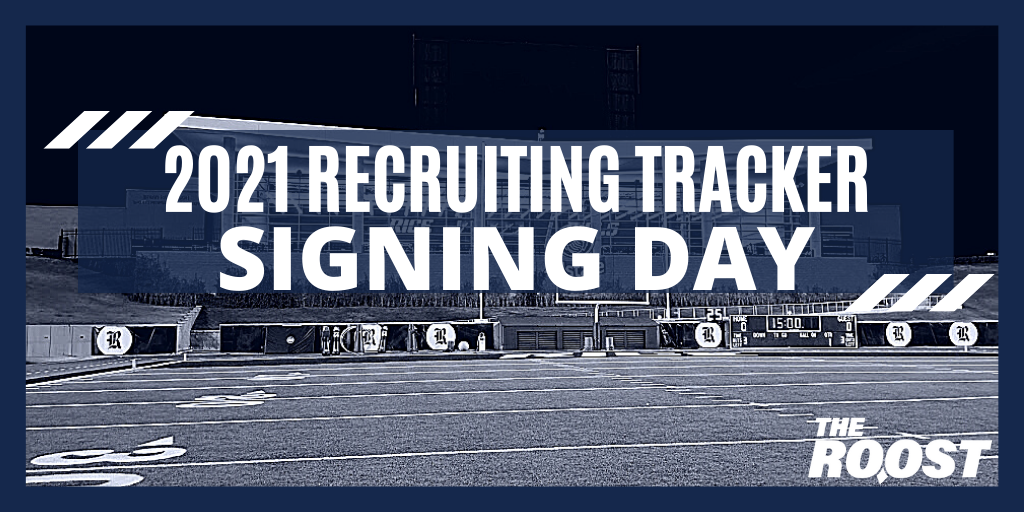 The 2021 Rice Football recruiting class just added a big addition in the defensive trenches. Jalen Hargrove has committed to the Owls.

Even with games being postponed left and right, the 2021 Rice Football recruiting class continues to produce good news. There is roughly a month to go before the early signing period and the 2021 class is coming together nicely, including the most recent addition hailing all the way from the Northeast.

Defensive lineman Jalen Hargrove from Choate Rosemary Hall has committed to Rice football. The 6-foot-3, 305-pound athlete made the move just one day following his officially offer from Rice. The less than 24-hour turnaround puts him among the quickest triggers in the 2021 class. He certainly knew what he was looking for.

Hargrove was one of a few offers handed out by the Rice football recruiting staff in the past week. You can read more about those other offers and targets in our most recent recruiting update.

Rice was the first school to offer Hargrove, something that’s become somewhat of a common occurrence with the current recruiting staff. They’ve been quick to identify talent and act upon what they see on film, not waiting for other offers to tip them off. It’s part of what has enabled them to get in early and hold on to some extremely talented players.

Hargrove can do a lot of different things for a big guy, but his power up the middle is one aspect that stands out the most. He just won’t be blocked. His highlights are play after play of him plowing through unwitting offensive linemen who only hoped they could slow him down. Once Hargrove gets moving, it’s hard to slow him down. He’s going to be fun to watch in the trenches at South Main.