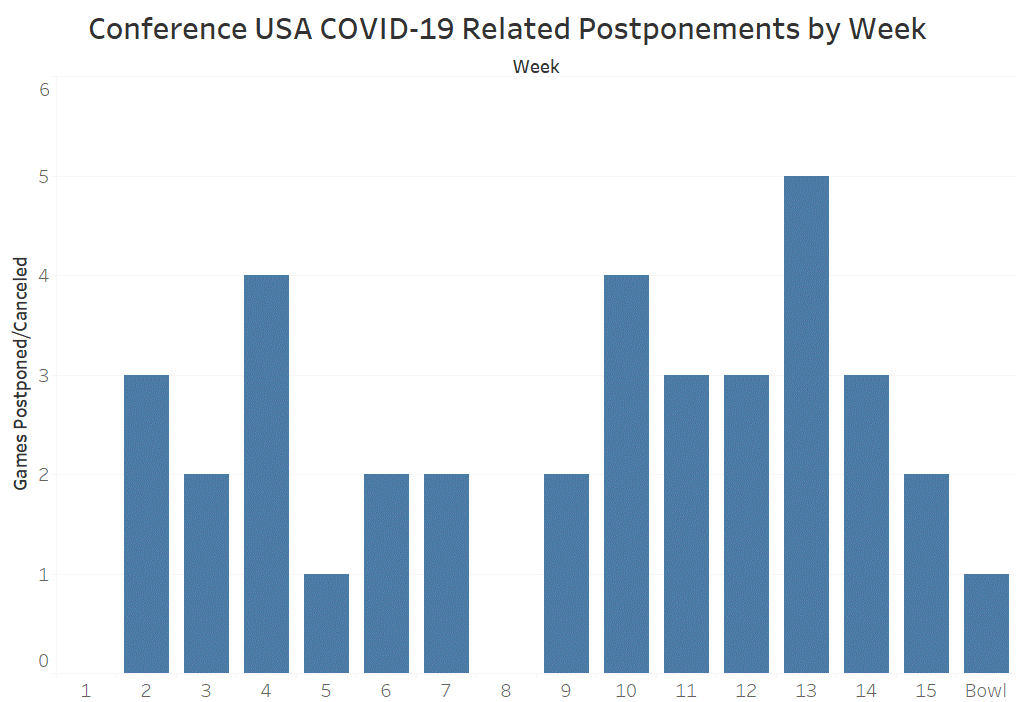 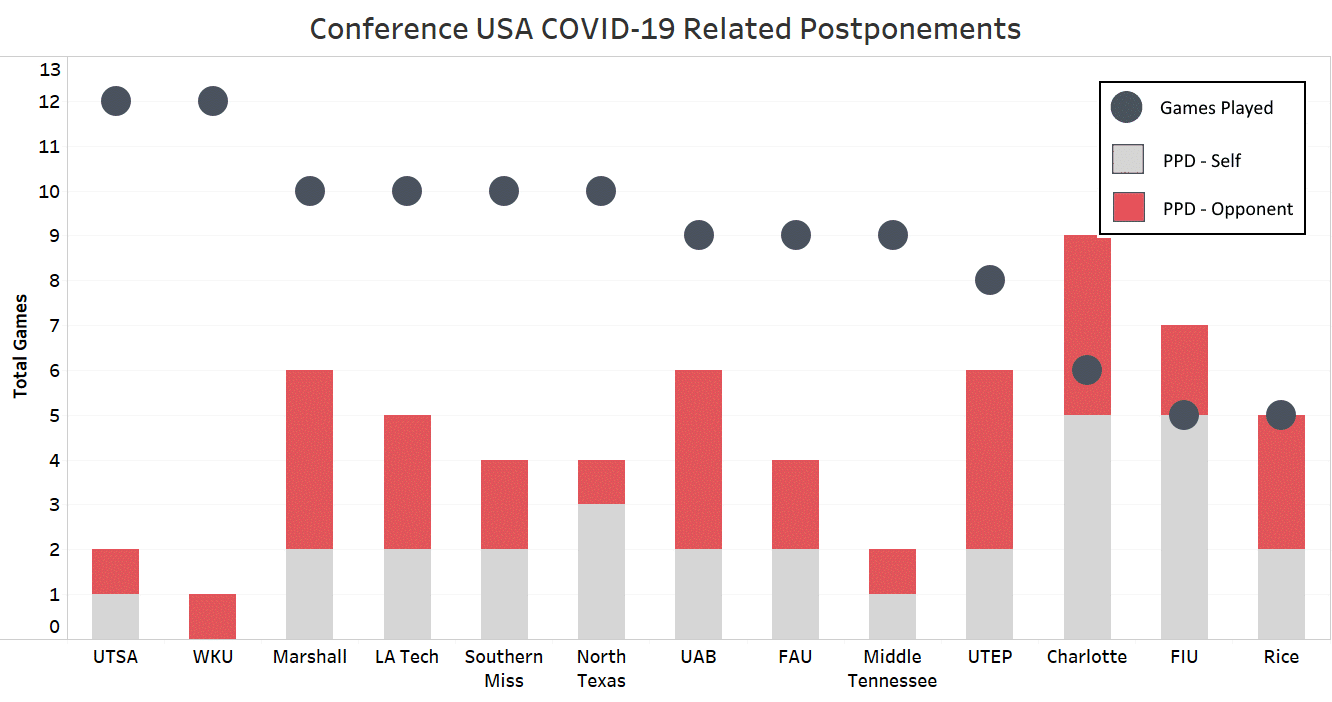 Conference USA Football was back in action this weekend. Here’s the latest from the teams on the gridiron in Week 15.

Rice wraps up one of nation’s shortest seasons

A five-game slate came to an end Saturday for Rice football, who fell to a beat-up UAB squad at home. The Rice offense couldn’t mount a comeback on the arm of third-string quarterback Wiley Green as the Owls’ bowl hopes came to an abrupt end. Last week’s thrilling upset of a ranked Marshall team should help ease the pain. A lot can happen in the span of five games. Rice certainly proved that.

After announcing Will Hall as their future head coach this week, Southern Miss sent off interim head coach Tim Billings with an upset win. The Golden Eagles won a shootout over FAU, taking a lead on the penultimate play of the first half and keeping it for the remainder of the contest.

There were midseason debates about where this game should be played. Eventually, these two teams took the field at Apogee Stadium for what turned into quite the barnburner. North Texas wideout Jaelon Daren scored four times, racking up 173 receiving yards in the process. UTEP trailed by as many as 17 points, but fought back to make things interesting in the fourth quarter on the arms and legs of backup quarterback Calvin Brownholtz.

Marshall canceled their game against Charlotte because of COVID-19 concerns, clinching the East in the process. UAB won the West by defeating Rice on the road. That sets up a battle of two one-loss conference teams in Huntington on Friday, Dec. 18 for the conference crown.

By virtue of the UAB win, UTSA misses out on a conference championship game appearance by fractions of winning percentage points. Nevertheless, the impressive debut season for head coach Jeff Traylor will continue for at least one more game. UTSA will play SMU in the Frisco Bowl.

Five Conference USA teams are bowl bound so far. That number should go up to at seven following the conference championship game. Here’s the current slate:

Conference USA Football was back in action this weekend. Here’s the latest from the teams on the gridiron in Week 14.

Western Kentucky at Charlotte were supposed to play last week, on a typical college football Saturday. Then the game was bumped back to Tuesday morning. And then further back to Sunday. Finally, on the third attempt, the teams actually played with Western Kentucky finishing up on top, 37-19.

Southern Miss and UAB were both free this past weekend. Neither team had played each other yet and but both had done prep work for each other – with a previous game postponed already this year. Most importantly, neither team had announced any COVID-19 issues. UAB needs as many games as possible to prevent a messy Conference USA West Divisional Title debate. This was an easy fix and the conference just whiffed. View the entire list of C-USA postponements here.

Per Conference USA, “A final determination of the matchups for the last weekend of the regular season (Dec. 10-12) will be made no later than Sunday, Dec. 6.” There have already been adjustments made to next week’s schedule. As of now, there are nine C-USA teams in action next weekend, with these teams open: UTSA, WKU, FIU and Middle Tennessee.

While the rest of the conference was working to schedule postponed or canceled Conference USA games, Louisiana Tech went rogue and added a nonconference game with TCU. With the West likely out of reach and no clear directives issued by the conference, you can’t really blame the Bulldogs for locking up the best opponent available.

And now we wait…

The West looks like it will come down to next Saturday game between Rice and UAB. The high count of cancelations among C-USA teams makes this game the tipping point for Blazers in overall conference winning percentage, the determining factor in this year’s divisional race. If UAB wins, the Blazers’ 3-1 record would trump UTSA’s 5-2 finish and UAB would win the West Division. If Rice beats UAB, UTSA would represent the West in the championship game. The East will come down to Marshall or FAU.

A weekly update on who the Owls will be playing this season including updates on key storylines, injuries and more.

All-American Level subscribers on Patreon get access to a monthly Q&A with me. The November focuses on the upcoming month of Conference USA football.

Q. How badly did Conference USA bocth the end of season scheduling? Shouldn’t Rice be playing UTSA this weekend instead of Marshall?

A. You could see the writing on the wall when Rice had the Marshall game added back to their schedule the same week the UTSA game was postponed. I understand the impetus from the league office to get as many games back on the schedule as possible, but using hindsight (not a luxury they had at the time) it seems pretty clear that most if not all of those impacting programs were going to have multiple games unplayed by the time the calendar got to December. So, what’s the right answer?

Sorry! This part of content is hidden behind this box because it requires a higher contribution level ($25) at Patreon. Why not take this chance to increase your contribution?

Conference USA Football was back in action this weekend. Here’s the latest from the teams on the gridiron in Week 13.

We’ve seen a lot in 2020, but Tuesday morning football would be a first. That’s the route being taken by Conference USA to ensure a safe playing environment for Western Kentucky and Charlotte, the latter of which required extra time to “clear COVID-19 protocols that would have prevented Charlotte from competing this Saturday.”

There have been dozens of postponed games in Conference USA so far, but none had been tabled on game day, yet. That changed this week when the game between Rice and UTEP was delayed and soon postponed following testing results at UTEP. View the entire list of C-USA postponements here.

The only C-USA game played on Saturday as not an exciting contest. UTSA ran all over North Texas, literally. The Roadrunners amassed 443 rushing yards, including 251 from running back Sincere McCormick who continues to impress.

Regular season football in December is a silver lining from this up-and-down season. As of right now, five games involving Conference USA teams are scheduled to take place whereas there would have only been a conference championship game next weekend during a typical year. Bonus football, it’s a good thing.

Will there be more?

There are plenty of scheduling dominos that have yet to be played at the time of this post. UAB hasn’t played since Halloween and isn’t slated to play next weekend. Their most recent postponement (Nov. 27 vs Southern Miss) would have been their last game at Legion Field. Could UAB add a game in Birmingham prior to their season finale at Rice on Dec. 12? It sure would be nice.

If Western Kentucky is able to play against Charlotte on Tuesday, they’ll join UTSA as the only teams in Conference USA to play 11 games (so far) during this uneven season. Marshall, who leads the East, has played seven games. UAB, expected to be the frontrunner in the West with a victory over UTSA, has played seven. Rice which hasn’t been the initiating party for a postponement since they started their season on Oct. 24, has played just three.

A weekly update on who the Owls will be playing this season including updates on key storylines, injuries and more.

One week in the books for @RiceFootball spring practice. Here's what stood out so far ⤵

Take a closer look at the revamped @RiceFootball wide receiver corps and more in this week's spring practice notebook for subscribers.

Finally healthy, this unit could be a lot of fun to watch next fall. #GoOwls

For a 3️⃣rd consecutive season, @nancymulkey has earned spots on both the #CUSAWBB All-Conference First Team AND the All-Defensive Team!

The big win Saturday was fun, but questions remain after three one-sided games for @RiceBaseball at the Shriner's Classic. #GoOwls

Rice goes 1-2 at the Shriners Classic. Back in action Tuesday vs HBU.

This guy can do everything. Very nice.

Guy Garibay gets a pair of strikeouts in a 1-2-3 inning in his collegiate pitching debut. Moving to the T-9 Texas State leads Rice 9-1.