The Roost’s 2022 Rice Football Season Superlatives exist to honor exceptional Owls who made a difference on the field this season. Here’s the complete list.

There were many individual performances worth recognizing in the 2022 Rice Football season. In addition to the more traditional awards below, make sure to check out The Roosties, our fourth annual award show from The Roost Podcast, which features a different angle of honors. From our favorite plays to the players that surprised us the most, we cover some of the more creative superlatives on the show.

Excerpt: “Esdale would go on to catch 42 passes as a Rice Owl. 25 of them went for a first down. 13 of them were for 15+ yards or longer. He was a chain mover and a big-play maker, coming through in clutch moments time and time again. While Bradley Rozner and Luke McCaffrey were the wideouts that most often found paydirt and racked up the yards, Esdale’s contribution was clutchness.”

Excerpt: “After a parade of reliable all-conference caliber linebackers that have passed through the Rice football locker room in recent years, finding someone who could fill those shoes was a daunting task. The Owls found at least one such man in Conti. And fortunately enough, he still has two more seasons of eligibility to make a difference at South Main.”

Excerpt: “In that span, he made six kicks from beyond 30 yards. Rice had one such make all of last season. He had four go through the pipes from 40+ yards away. And this after attempting his first collegiate field goal last season. For someone brand new to the position to give his team the utmost level of reliability was truly remarkable.”

Excerpt: “The kid is a freak of nature,” fellow teammate and captain Trey Schuman said of Boenisch. “He’s 6-3, 330 and can move. It’s not every day that you see somebody like him. Really the thing about Blake is his maturation process has been insane.”

Excerpt: “When Baker donned his helmet for the final time against Southern Miss in the Lending Tree Bowl he put an exclamation point on a Rice football record that won’t soon be broken, if ever. Baker leaves Rice as the all-time leader in career starts, making 53 starts over his six-year career.”

Off. Player of the Year — WR Luke McCaffrey | Full Story

Excerpt: “The emergence of McCaffrey coincided with an offensive awakening that never seemed to be fully realized. Rice football is better with McCaffrey on the field and the Owls are fortunate he’s got more eligibility to spend catching football at South Main.”

Excerpt: “Pearcy would go on to make more plays, including tying a season-high seven tackles with one sack and 1.5 tackles for a loss in the Owls’ Lending Tree Bowl matchup with Southern Miss. All three of those measures tied or lead the team outright. In another big moment, Pearcy showed up. Because that’s what great players do.”

Off. Player of the Year — WR Bradley Rozner | Full Story

Excerpt: “Making it back to the field in any capacity and contributing to the offense would have been a relief for Rozner who hadn’t seen the field in such a long time. Becoming a go-to game-breaker was even more impressive. In many ways, it’s just like that game-winning score against UTEP. Someone gave Rozner a chance. He did the rest.”

Nearly automatic at a position in need of stability, kicker Christian VanSickle is our 2022 Rice Football Special Teams Player of the Year.

There was a point during the 2021 season when Rice football just stopped kicking field goals. The coaching staff wisely made the decision to go for it on fourth down more often rather than put the ball at the feet of anyone in the specials teams room, resulting in zero field goal attempts after November 6 and a whopping 10 fourth down tries.

That was the backdrop that Christian VanSickle stepped into this season. Competence would have been enough. He was excellent and a sure-fire selection for our 2022 Rice Football Special Teams Player of the Year.

With VanSickle’s foot doing the honors, Rice improved from 5-for-11 (45%) on field goal tries to 11-of-16. (69%). Van Sickle did not miss a single extra point; the Owls missed two such tries the season prior.

But it wasn’t just the overall bump in numbers that made VanSickle so reliable, it’s how those statistics were accumulated. VanSickle converted his first 10 attempts, beginning the year a staggering 10-for-10.

In that span, he made six kicks from beyond 30 yards. Rice had one such make all of last season. He had four go through the pipes from 40+ yards away. And this after attempting his first collegiate field goal last season. For someone brand new to the position to give his team the utmost level of reliability was truly remarkable.

The field goal unit went from a liability to an asset in the span of one season and VanSickle was the prevailing reason for that improvement.

VanSickle wasn’t perfect. He did end the year on a surprising cold spell, missing five of his last six attempts. Cold and windy conditions in the Owls’ final two games of the season clearly impacted the ball coming off his foot and a few more makes in the regular season finale against North Texas could have elevated his stature even further. Nevertheless, what he did for this team this year was crucial.

If VanSickle doesn’t emerge, Rice football probably drops at least one more game along the way. He contributed 13 points himself in the Owls’ seven-point win over UTEP. He was responsible for seven points in a tight game that would become a 12-point win over Louisiana. For an offense that had its ups and downs, VanSickle was extremely consistent, and that’s what Rice football needed the most.

Rice football travels to WKU this week with bowl aspirations in their sights. Here’s what we learned from practice this week.

The final quarter of a rigorous 2022 Rice football schedule begins this week with a road trip to Western Kentucky. The Hilltoppers are just ahead of the Owls in the current conference standings with both teams in need of one more win to reach bowl eligibility (WKU needs seven wins this year because of their 13th game with a trip to Hawaii).

This week’s roundup focuses in on a new adversary the Owls are facing this week, stakes for this game, the offensive line, special teams adjustments, a few individual standouts and more.

Rice Football vs the Flu

Rice football plays Louisiana this week, which comes to Houston riding a 15-game winning streak. Here’s what we learned from this week’s practices.

Saturday can’t get here soon enough. Rice football is eagerly awaiting another chance to get on the field after a thorough drubbing of McNeese State last weekend. This week’s opponent. Louisiana, promises to be a much tougher out.

The Owls have been hard at work to make corrections from last weekend’s missteps and implement their game plan for the Ragin’ Cajuns. Along the way there have been some shakeups within a few position groups, injuries and a few learnings to pass along prior to Week 3.

Rice football has released its depth chart for its season opener against USC. Here are the latest and a few notes on relevant players. 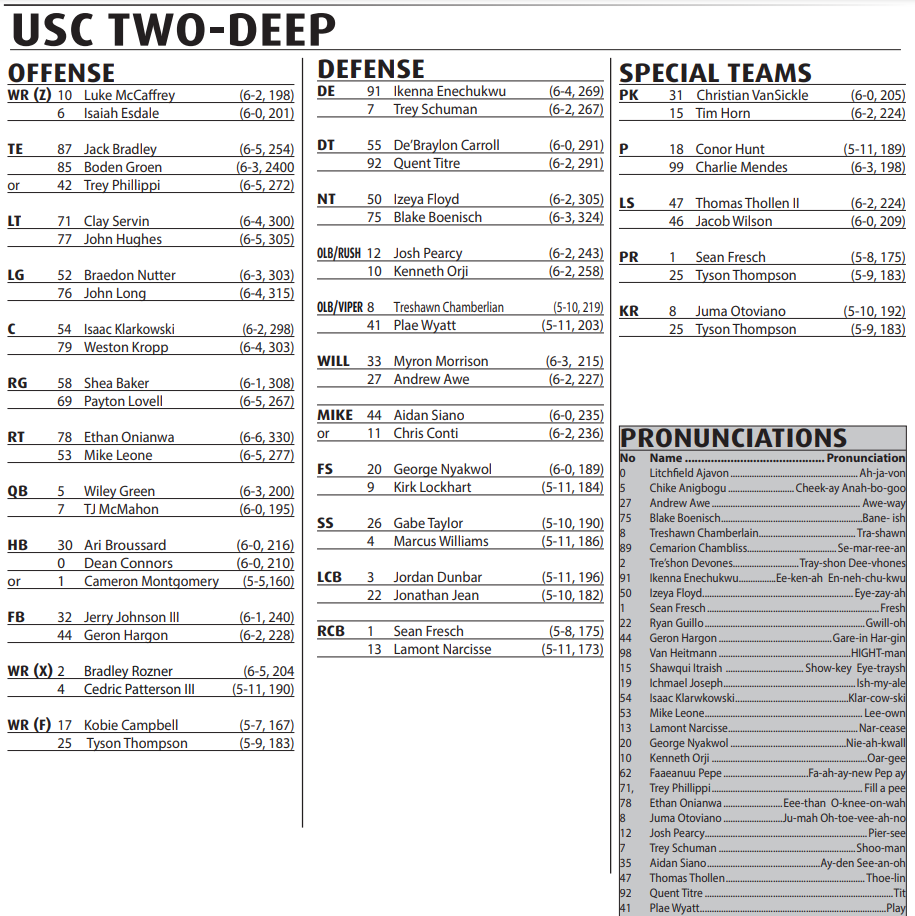 Rice football has had two players medically retire since fall camp began just a few weeks ago. Gavin Reinwald, who had been the Owls’ backup tight end behind Jack Bradley, saw his season end with a torn ACL midway through camp. Wide receiver Sam Crawford, who had been in the mix for a starting spot until recently, announced his medical retirement on Thursday evening.

There’s also no Cedric Patterson on this iteration. As mentioned to our subscribers earlier in the week, he is not traveling with the team to Los Angeles.

Trey Phillippi, who until recently played offensive line, is listed as the backup to Jack Bradley at tight end (with an OR designation between himself and Boden Groen. Getting him into the game on such short notice seems like a stretch, but he’s already a capable blocker, so seeing him listed this high on the depth chart could mean he may actually see some action on Saturday.

Safety Marcus Williams has been in and out of the lineup with injuries since he arrived on campus, but he’s recently cracked the two-deep.

Getting ready for the game

The Roost has plenty of content already up and running to get you ready for Rice football vs USC this weekend.